“As a child, I remember my grandfather telling us stories of how we came to live in this great nation. My grandfather was fortunate to secure a position as a railroad worker on the Rock Island in the 1950’s. He worked as a migrant worker for 10 years before he was able to bring the entire family from, Zacatecas, Mexico in the 1960’s. My mother, then 13, explained how she struggled to understand the new language and culture. She talked about not fitting in and feeling awkward and out of place.  She spoke about teachers not taking the time to teach her the language and her own feelings of inadequacy. She, like thousands of other immigrant students, decided to opt out of school and into the labor force taking a minimum wage factory job at the local steel mill, a trend I still see today. These discussions would fill me with sadness. How could my mother feel out of place? How could someone not appreciate her talent and her desire to learn? Most importantly, what was so wrong with our educational system that it would allow thousands of immigrant students to fall through the cracks? These questions would become my life’s passion.

Today I look for the answer to these questions in my students. I work to help motivate, educate, and develop the skills and self-discipline necessary to fight for their futures. Cultural appreciation is the driving force behind these efforts. They know that if they believe in themselves, their heritage, and who they are, they can achieve that which they aspire to become. My students know that, for me, college is not an unattainable dream but an expectation to be achieved.

I love what I do and work to make a difference in the life of every child who steps foot in my classroom. I change the world one child at a time. I am a teacher.”

Together we can make a difference!

I was born in Taos, New Mexico and then brought up in the San Luis Valley in Southern Colorado.  I am of Hispanic ancestry and grew up in a bilingual home where Spanish and English were languages of choice. Although I do not have children of my own, I can confidently claim I have assisted in helping raise my 15 sisters and brothers children.  As well as parent many, many, many students and parents along my educational career.

Growing up in a large and diverse family, who spoke two languages had both advantages and disadvantages.  I choose to remember advantages rather than linger on the disadvantages.  However, I must admit, I will never forget the imposed disadvantages.  I know the power in numbers.  See, I remember knowing how proud I was that my parent’s families served to protect this country, even when it wasn’t kind to them.  Why?  Because I know there was power in numbers as many minorities were put on the front line in war.  I remember my parents walking into school and threatening to take all his 15 children out of school if they ever laid a hand on any of us for speaking Spanish or any other disciplinary actions.  That worked power in numbers.  I can remember my father negotiating pay for the work in the fields and telling others to demand more money or the crops wouldn’t be picked. Power in numbers!  Although my father was not a fan of the church, my mother who was like father and mother in his absence, instilled in each of us that church and community were essential.  Power in numbers!  Growing up alongside many, many migrant families and all of us being discriminated against instead of celebrated for a rich language and culture, only made me more passionate and committed to this work inside and outside of education.  For every child, parent or teacher who believes or doesn’t believe in themselves, I believe strongly for them that it is essential that we show them the power in numbers and education is the equalizer.  I look forward to the opportunity and work involved to convince our “gente” of our Power in Numbers!  Let’s get it done. 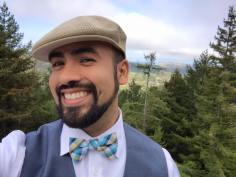 Alberto Nodal teaches bilingual Kindergarten in San Lorenzo, California (Northern CA in the Bay Area). He has taught bilingual 2nd grade, 3rd grade, Transitional Kindergarten and now Kindergarten. With a Masters in Early Childhood Education, he loves to incorporate the Arts into his teaching and strives to be an advocate not only for his young students, but his students’ families, and the larger Latino community.

I was raised by a single mother and the love of my grandparents in  Aguas Buenas, as small town in Puerto Rico. “Tienes que estudiar y ser una professional,” my abuelo would always say. From a very early age, I immersed myself in books to escape the hardships my family endured. I learned that education was the path to escape poverty, and I was determined to end that cycle, which had persisted in my family for centuries.

The support of educators who saw my potential and programs like Upward Bound opened many doors. As a result, I wanted to give back what was given to me and became a teacher. Teaching is my way of changing the world one student at a time.